In the Kalari Pit 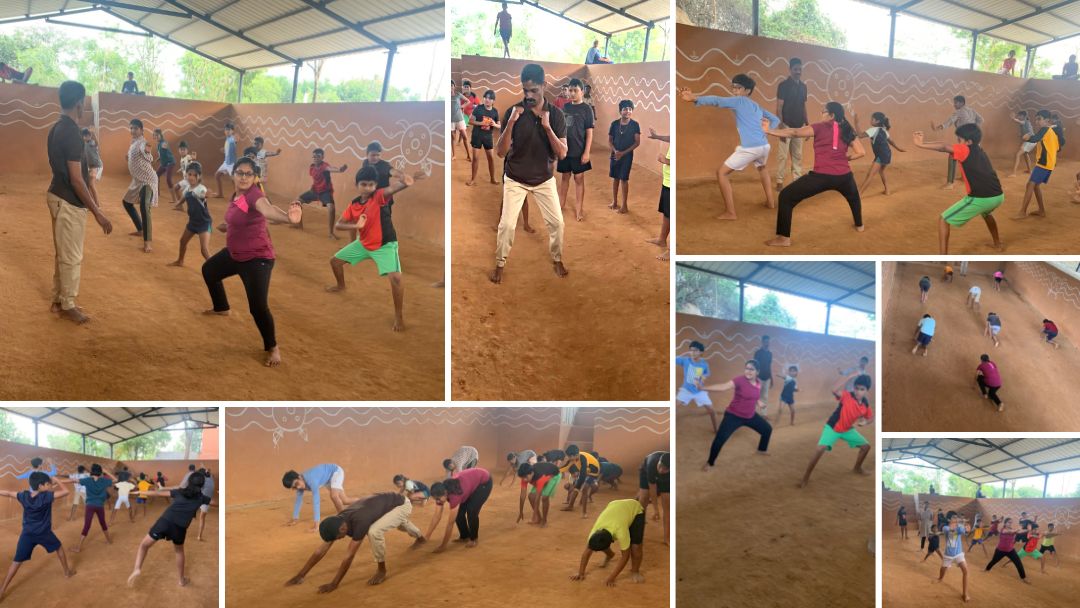 A tiny lamp blinked at the far end of the kalari pit of The Peepal Grove School. The speck of fire seemed to be watching quietly as the boys and girls of Grades IV and V synchronised their limbs and bodies with their kalari teacher.

When they faltered, Rajesh, the kalari teacher, would hold a foot and effortlessly manoeuvre to reach a palm that would then hold the foot and end in a graceful statuesque position. Others copy the move. ``Bhaiyya, you make it look so easy,” ’a boy cries with amazement. ``Bhaiyya, how long have you been practicing?’’ another student asks, trying to balance on a leg. ``How old are you?’’ the yoga teacher who is assisting Rajesh asks. Ten, says the boy. ``More than that,’’ says the teacher. ``That’s more than my life’’ the boy says as the two teachers smile.

This is the only school where Kalaripayattuis taught in a traditional kalari pit, says Rajesh. The pit is 42 feet long and 6 feet deep. At that depth, the temperature stays stable. That is the depth beyond earthly existence, life and death. It’s a level where nobody has ever been cremated, Rajesh explains.

The twinkling flame in the pit reminds Rajesh of the first time he, as an eight-year-old lad, had learnt these kalari moves under his teacher at a kalari in his hometown of Badakara in Kerala.

The flame has been passed on from centuries when folk warrior heroes of Kerala perfected the art of Kalaripayattu. “Its principles are derived from the scriptures”, says Rajesh who has now been teaching students at The Peepal Grove School for over 12 years.

About 50 children learn under him and practice till he arrives the next week.

There is a sudden gust of excitement and students chat excitedly. The yoga teacher assisting Rajesh had left to get sticks. Sticks. That was the reason for the excitement. Soon the sticks arrive and the students want to try their hands at swirling the stick with each hand.

Rajesh is reminded of a student who picked up the stick manoeuvre very fast and began using two sticks at the same time in both hands. The student was passionate about it and wanted to move on to the next stage of whatever she was doing. She practiced so hard that she was able to master it. Kalari demands that kind of spirit.

Rajesh also teaches Kalaripayattu at a few schools in Kerala as a self defence art. It is only The Peepal Grove School (among all the schools in the country that offer this traditional martial art) that has a kalari – the name for a traditional kalari school.

He calls Kalaripayattu the mother of all martial arts and says that it spread to China and the Far East through Bodhidharma, a Buddhist saint who is said to have lived more than a 1,000 years ago in southern India.

Kungfu and Karate represent the fourth stage of kalaripayattu, he says. The martial art form has basically four parts. The first stage focuses on gaining control over the body through ``meyvazhakkam’’. The second stage is ``kolthari’’ or use of wooden weapons. The third stage is mastering the use of metallic weapons and the fourth one is unarmed combat. Students at The Peepal Grove School are taught a bit of all four and it gives them confidence and the skill of self defence.

A new batch of older boys and girls enter the kalari pit and the younger ones reluctantly surrender their sticks and leave. ``Tomorrow you can do sticks early in the morning’’, Rajesh assures the departing students.

Practice. That is the only thing that can help them master kalaripayattu. The rewards cannot be measured. It's more than self defence and confidence. But for that, they need to practice nityabhyasianayeyumedukkum, he explains (the one who practices regularly can even lift an elephant! ). ``You have to practice till I return next week,’’ he tells his last class that Sunday.

It's afternoon and it's time for Rajesh to leave for his home in Badakara. Rajesh bids goodbye to his students and promises to do kolthari(stick manoeuvres) the following week. ``But, practice,’’ he reminds the children again.